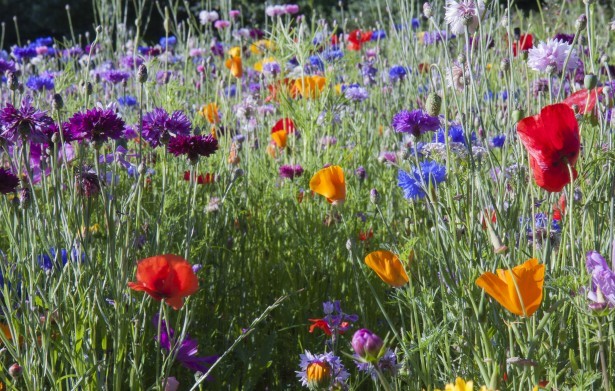 It is now 100 years since the British Legion adopted the idea, in 1921, of wearing poppies – first fabric and then paper – as a mark of remembering and honouring the men and women who have given their lives in wars and conflicts since the First World War for our safety and in the service of protecting peace in the world.

The idea of the poppy as a symbol of remembrance and as a way of generating funds which in turn give back support to former service men and women damaged by war, and to their families, came from two women, Moina Michael and Anna Guérin, working in America, France and Britain.  Both took their inspiration from McCrae’s poem,

In Flanders fields the poppies blow

Between the crosses, row on row.

Michael was particularly moved by the final lines of the poem:

To you from failing hands we throw

the torch; be yours to hold it high.

If ye break faith with us who die

we shall not sleep, though poppies grow

The poppies grew in the battlefields of Flanders because of the churned-up soil. Their bright red is a visual splash that reminds us of the blood and lives poured out for us.  As a flower, poppies are fragile and quickly fade, reminding us of the lives cut off by war.  And yet despite their fragility, they come back year after year – an enduring reminder of the sacrifice made.

But did you know that poppies were not the only flowers in the mud of Belgian and French battlefields in the First World War? Soldiers living through months of heat, cold, rain, fear and long, boring waiting in the trenches made gardens in the mud banks of trench walls with seeds sent to them by their families.  Through this they kept a small visual reminder of connection with home and brought a little colour and peace into their surroundings.  In the midst of danger and death, they grew a creative act.

The former Bishop of Singapore and Birmingham, Bishop J L Wilson, who was a Japanese prisoner of war in the Second War, recommended three thoughts for us all to carry in our hearts on Remembrance Sunday.

1. That we should be thankful for the sacrifice of others

2. That we should be dedicated to work for peace and justice in the world

3. That we should be sorry for human sin and evil.

And so, as we remember today and on Sunday, let us make this a creative act of thanksgiving and of taking up the torch of the fight against the enemies that cause war: greed, injustice, hatred and intolerance.  As we remember and reflect, may God give us the courage to blossom as peacemakers, so that those who have died for us may rest in peace.

In the name of Jesus Christ who died that we might have life in him.