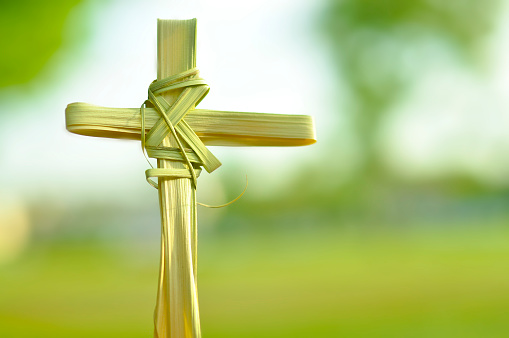 Symbols of togetherness and connection…

By the way, for those you who heard (or read) last Sunday’s sermon on growing things, in case you were wondering, I did plant those seeds last week. And yesterday afternoon, I spotted the first tiny seedling poke its head up!

Palm Sunday is usually characterised by a donkey and lots of palm crosses. For those of us who only come to church on Sundays, there’s a bit of a jolt – we celebrate Jesus’ triumphal entry to Jerusalem, and then suddenly it’s Easter Day. It’s as if the key scenes of the movie got edited out.

Normally, the church carefully moves from Sunday to Sunday, shaping the readings to tell the story of Jesus’ life and ministry in a coherent way and flow.

But this week, it simply doesn’t work. Because Maundy Thursday, Good Friday, and Holy Saturday all fall between today, and next Sunday.

And those three days – Thursday / Friday / Saturday – are three of the five most important days in the Christian year. The others, in case you were wondering, I was putting as Easter Day and Christmas Day.

Palm Sunday is a day of raucous celebration. Jesus returns to Jerusalem for the Passover Festival – he was there a couple of years previously for the Passover – and this time he is not just an unknown itinerant rabbi.

This time, as he enters the city, he is feted and celebrated as the Messiah – the one who will bring God’s peace to God’s people, and overthrow all oppression.

Most of all, he will end the hated rule of the Romans, and will make the Israelite nation free once more. Ironically, they have such a fixed idea of what God’s Messiah is and will look like, that they can’t see or understand the reality of Jesus’ message.

So when the reality begins to sink in, when Jesus does not begin an armed insurrection against Rome, the religious leaders take the opportunity to destroy him – using the Romans. They arrest him as a political and religious rabble rouser and dissident – which he is! And they demand he is put to death for blasphemy.

And strangely, that relational and restorative nature is seen in the cross.

There’s various ways to make a cross. One way is very neat and lovely, and it’s the way that’s used to make the pre-made ones you have in your hands. It’s also fiddly, and takes quite a bit of practice. I know – I’ve done it.

But there’s another way – which I’m going to try and show you now.

Split it open, and carefully tear it in two. Sometimes things get broken. But when they have been put back together, sometimes the new thing that is made is even more beautiful than the original. The Japanese have made this into an art form, called Kintsugi.

For me, the cross symbolises RELATIONSHIPS.

The first piece of the palm is the relationship between HEAVEN and EARTH – between GOD and US. That’s the up / down bit.

The second is the relationships between YOU and ME. Between one another – all humans, all creatures.

These relationships are important, and they often get broken or damaged by our words, our actions, or our inactions. Our mistakes. Even sometimes things we do on purpose.

That’s basically what sin is. The Greek word is “hamartano”. Literally, it’s the word used of the archer who misses the target. It’s simply being less than our best selves.

But Jesus did that for us. He knotted everything together.

I heard a story once about navy helicopters. Apparently, there is a single nut on the top of the rotor blades which is called the Jesus nut. Apparently they call it that because if you fly the helicopter without ensuring it’s sufficiently tightened, you’re likely to meet him!

So – take your two strips of palm. And this is how we bring it together.

[This sermon was very much a “show-and tell”, which is impossible to write! Basically, the two pieces are laid across each other and the tail of the horizontal piece gets wrapped around the vertical to hold the two together, and then various bits get tucked in to tidy it up! Plenty of instructions on the internet!!]

When we look at a cross this way – two pieces (the Heaven / Earth and Me / You directions) broken and then knit back together – it becomes a beautiful symbol of strength and unity. It’s transformed from a symbol of suffering into a symbol of togetherness and love.

And so, here’s the link – from Palm Sunday to Easter Sunday. It’s in your hands.

Thanks be to God!