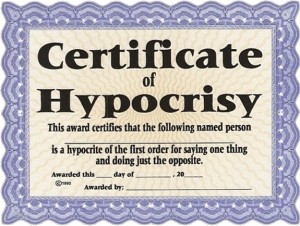 It amazing that it’s so commonplace that we even have a cliché for being an utter hypocrite, and getting away with it. “Do as I say, not as I do” is the classic way of telling people (usually children) that we expect them to obey our teaching and then to turn a blind eye as we blithely ignore those same teachings and principles. It’s even said with wry humour, acknowledging that whilst we know what the right thing to do is, we have no intention (or lack the integrity or ability) to do it ourselves.

It might be the motto of politics – accompanied only by that other great commandment in life, “don’t get caught!”

But what kind of world is this? And what kind of people are we, that we simply accept this kind of double standard as ‘the way things are’?

This Sunday there are two passages set from John’s gospel – John 5.1-9 (Jesus heals the man by the pool), and John 14.23-29. In the first, Jesus heals a man who has been waiting for a miracle for 38 years. The second passage is probably best known for the quote “peace I leave with you, my peace I give to you… Do not let your hearts be troubled.”

But in each passage there’s another detail. In John 5, Jesus asks the man, do you wish to be made well? Instead of saying yes or no, the man replies with what might be called an excuse. “Sir, I have no one to put me into the pool when the water is stirred up; and while I am making my way, someone else steps down ahead of me.” Fair enough, he needs help! But if we look carefully, he’s actually dodging the question, instead of engaging with it. He deflects Jesus, thinking that there is criticism implied. Maybe there is, maybe not. Whether Jesus’ question was open or critical, his response to the man is devastatingly simple and powerful: “Stand up, take up your mat, and walk!”

In John 14, Jesus is asked, “Lord, how is it that you will reveal yourself to us, and not to the world?” He replies, “‘Those who love me will keep my word, and my Father will love them, and we will come to them and make our home with them. Whoever does not love me does not keep my words…” Jesus’ reply is again so simple, so direct. Do as I say, and you will show your love through your actions.

I learned this years ago when I was a teacher, though I think it holds true in every walk of life. Respect is earned, not demanded, nor given by right of hierarchy. And children have a gift for spotting hypocrisy (and bluffing) a mile off! I couldn’t expect them to go and clean the endless toast crumbs and tea spills in their boarding-house kitchen at the end of the evening if I wasn’t willing to help, or if I left a mess in the house-staff study.

We are always full of excuses. And whilst I know better, I still do it sometimes – though my daughter is very good at calling me on it! There’s one she hasn’t spotted yet: I dread the day she does, and tells me she won’t tidy her room until my study is neat.

“It’s all very well to say that, but it can’t be done.” And a whole host of reasons and excuses follow. Yesterday I was at a Scout hut, and saw a poem by Edgar Albert Guest, called “It Couldn’t be Done”. It made me smile wryly. How true it is. The alternative is the old story of “Whose Job Is It?” I bet that Jesus would be found with the man in Guest’s poem.