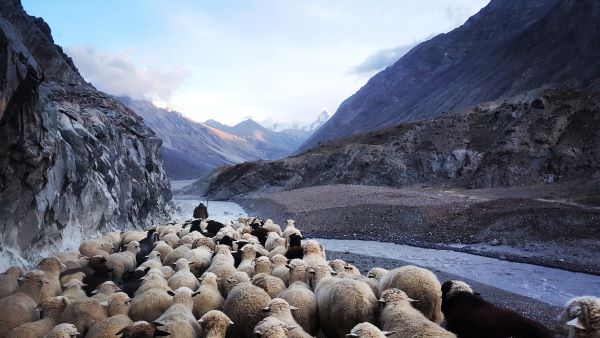 God is frequently described as the shepherd of his people. For example, Psalm 95.7: For he is our God, and we are the people of his pasture, and the sheep of his hand. O that today you would listen to his voice! Or again, Psalm 80.1 Hear us, Shepherd of Israel, you who lead Joseph like a flock. There are many many more examples!

Most of us probably have some idea of what we “think” shepherding is like – from the perspective of the observer! Talk to any shepherd and they’ll quickly disabuse you of most of those assumptions! Recently I was watching Jeremy Clarkson’s Farm tv series, and his attempts with the sheep were hilarious, in that nothing went to plan, and the sheep always ended up doing almost the opposite of what he wanted. But when the real shepherd (Ellen) arrived, order was restored and things went well. There’s definitely a sermon in that!

Bishops are set as shepherds of the people, and they share that responsibility with those who are called to be priests, who are then set in parishes to be shepherds of God’s flock in that place. The metaphor of sheep and shepherd runs right through Christianity, in practice as well as theory. Bishops, like priests, have a deep care and love for those they are called to look after, which leads me on to the news I must now share with you.

As most of you know, I have been going through a period of immense strain and pressure in my personal life, and have had to take several months off since last August, compounded by pneumonia just before Christmas. I was so happy to be back at work and in ministry for Easter – but the clergy HR and OH depts are most concerned that additional support is needed to ensure I can thrive in ministry, and not go under. Therefore the Bishop, who is (among many other things) “shepherd to the shepherds”, has asked me to take a sabbatical break whilst they assess what support I need, and can put it in place.

This means that I am now moving from pulpit and altar to pews until August. During this time, Bishop Gavin, as our shepherd caring for us all, has asked Revd Chris Ashton, who is the final year curate at Grove and Hanney, to come and help us, to ensure that all our services are covered, and to do those parts of my role which cannot be put on hold and are necessary for the smooth running of the benefice. We will also have Revd. Dick Whittington to help cover the services I would otherwise have taken. This means that Revd. Jim and Lucy and all our churchwardens will hopefully not be put under stress due to my absence, which is very important.

During these months, so that I have something constructive (but fairly stress-free) to do with my time, Bishop Gavin has asked me to write a report on rural ministry. Whilst I am doing this, I will be with you in the pews on Sundays, and you’ll see me around at various things like coffee mornings etc.

I’ll be continuing to write, as it’s something I love doing. So for now I’ll leave you with a reflection on sheep and shepherding from a book I am very much enjoying at present, as it’s looking at Jesus’ teaching through a Jewish lens, and trying to understand how his original Jewish hearers would have understood his words. Sadly, so much of the depth and intensity of his words and stories is lost on us in our modern European 21st century lives.

As this Sunday’s readings are have a lot about sheep, this particular passage resonated for me. Sheep do tend to wander, when not confined, and their escape abilities are legendary. As is their ability to misunderstand the (usually well intentioned) attempts of strangers to get them to move off the road away from cars. Lake District holidays, anyone?

In the south of England and the Cotswolds, we’re used to seeing sheep in enclosed fields. So when we listen to Jesus talking about sheep knowing the shepherd’s voice, and following him, we are missing a large part of the picture that would have been obvious to Jesus’ immediate hearers in a Middle Eastern context.

“Shepherding in Israel is a wonderful metaphor for discipleship [which focuses on lifelong learning, growth and transformation]. In many countries, sheep spend their lives in fenced-in pastures where they spend their time grazing and milling about. Many Christians seem to think that the Great Commission is a matter of getting sheep “into the pen”—inviting people to accept Christ, the high point of their spiritual lives. In Israel, however, where grass has difficulty growing in the arid soil, sheep must know their shepherd, following him obediently from pasture to pasture. There, shepherding is a much more active task.

“Judith Fain is a doctoral candidate at the University of Durham. As part of her studies, she spends several months each year in Israel. One day while walking on a road near Bethlehem, Judith watched as three shepherds converged with their separate flocks of sheep. The three men hailed each other and then stopped to talk. While they were conversing, their sheep intermingled, melting into one big flock. Wondering how the three shepherds would ever be able to identify their own sheep, Judith waited until the men were ready to say their goodbyes. She watched, fascinated, as each of the shepherds called out to his sheep. At the sound of their shepherd’s voice, like magic, the sheep separated again into three flocks. Apparently some things in Israel haven’t changed for thousands of years.”

— Sitting at the Feet of Rabbi Jesus: How the Jewishness of Jesus Can Transform Your Faith by Ann Spangler, Lois Tverberg

Photo by Steven Lasry on Unsplash